5 years ago
Sean Triner
1 Comment
Fundraisers can spend a lot of time asking “Where can I find some major donors?” They can spend enormous resources searching for these loving and generous people in all kinds of places.

Clever fundraisers do it the easy way: They start by looking at home.

That’s right: The most likely place you’ll find major donors is on your existing donor file.

Related blog: The Missing Millions in YOUR Charity’s Database

It may seem more glamorous and exciting to seek new major donors from the rich and famous, the top end of town. And for universities, arts and capital campaigns that may not be a bad place to look.

But drilling down into the data, I can see much more money for most charities coming from mid-value donors. They’re in plain sight, and most of them are already direct mail donors.

Well, it isn’t. Not only is it not dead — for many charities, it’s more alive than ever! It is the single biggest source of donors who are going to give more than $1,000 in the future.

The chart below shows the huge proportion of money that comes in from the ‘small’ numbers of donors in the bequest and $1000+ categories in the Pareto Benchmarking study in Australia. 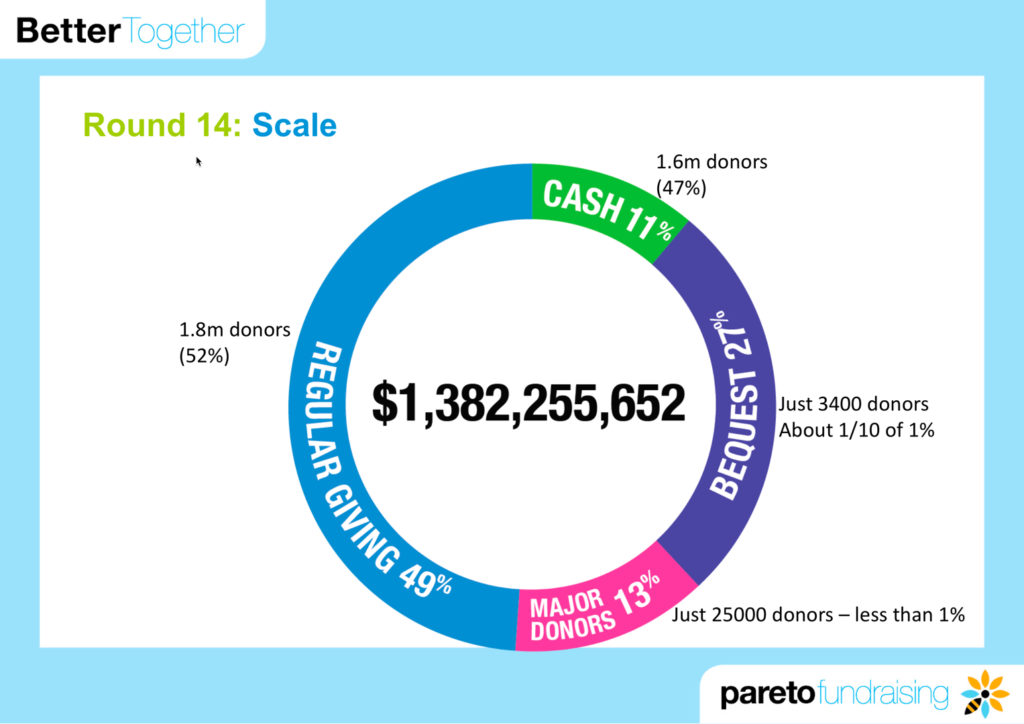 (For more about the superb Pareto Fundraising benchmarking study, check out their website).

Charities that succeed in raising money from donations over $1,000 tend to start with people already on their database. It works and is not that hard to do.

Want to learn how? Check out my Mid-Value Donor Super Course and I will show you step-by-step how to raise more money from mid and major donors. Join The Fundraisingology Lab and get instant access to this and more. It’s the quickest, cheapest and easiest way to raise more money for your charity! VIDEO: Roger Craver on the Amazing Donor-Behavior Prediction Tool You Can Use Now