Write down these three things:

Please go ahead and make your list. It will be worth it.

It’s a curious thing, but most charities, much of the media, and an annoying number of public servants appear to think that the percentage of money raised by charities that are spent on the core charitable work is the most important measure of worth.

So much so, that for some states and nations, return on investment (ROI) is one of the key measures that charities must report.

That obsession with ROI damages our ability to make the world a better place.

And I have the data to prove it.

So often, fundraisers are given the challenge to increase income by some amount without lowering the ROI (or, to put it the other way around, without raising the cost of fundraising, or COF).

ROI can be a useful measure – for example, when a fundraiser is considering tactic A vs tactic B to acquire new donors and there is a limited budget. Provided ROI is considered over several years, measured holistically (ie to include additional gifts, upgrades and bequests), and the rollout/repeat potential is considered, then ROI can be the best measure.

So why does it make me so angry? Principally, because an obsession with ROI above all else kills growth. Too many charities choose the path of slow growth – or even reject otherwise successful strategies – because of their fear of low ROI.

For example, charity A raises $40,000 from its Christmas appeal to donors, which costs $10,000 – an ROI of 4. They know that by increasing the amount of time spent on the appeal, sending out more information and writing longer, more professional copy (in other words, by spending more money) they could likely increase the donation income to $100,000. But the pack would then cost about $50,000. And the ROI would be 2.

So the boss says no, and the charity continues the old way, maybe improving income a bit by writing longer copy. Net income stays at about $30,000. An improved and more expensive method would have netted $50,000.

Apart from the fact that the charity has $20,000 less to spend on services (or fundraising growth) in the short term, the decision is even more harmful in the long term.

Meanwhile, Charity B, which decides to go the more expensive route, will benefit from:

This is not just some hypothetical example. The chart below depicts a real-life Australian case study. This charity decided to look at the long-term picture, and not worry about ROI. The consequence for this charity of their shift in mindset was enormous.

You can see that after a number of years with lower ROI, it is creeping up again. More importantly, the overall amount available for services (that is, net income) from Tax 04 to Xmas 07 was $2.08 million. (Charities in Australia usually have two peak times for mailing – Christmas and “tax” – which is mailed around April/May). If they had kept to the old strategy, and experienced a bit of growth, they could have expected to net about $600K.

I repeat: the organisation could have raised a net of $600,000, at an impressive average ROI of 7. Instead, they raised $2.08 million, at an average ROI of 2.8. Which result is going to help its beneficiaries more?

Why are so many intelligent people led astray by ROI to the point that they choose to be far less effective at what they exist to do in the first place?

The answer is simple – they’ve been told that this is what is important to donors.

But we keep hearing “ROI (or cost of fundraising, COF) is important to donors.” But who says so? Well, the media, common sense – and even the public. The problem is that this is what people (donors and non-donors) really do think. But it’s not how they behave. The charity above clearly had no problem.

I have lots of other examples.

The charity probably had to explain the strategy to some major donors and even the authorities. But its economic basis was so solid that those guys were not going to have a problem with it. Normal donors still gave – and they did nothing to “hide” their drop in ROI.

The reason donors give is that they are asked properly and they care about the cause. People who harp on about the amount of money that goes on administration are normally non-donors. They just use the cost of fundraising as a good excuse for not giving. (And they’re not going to give anyway — they’d find some other excuse if that weren’t available to them.)

I recall being told about an experiment where a group of people were given real money to donate. They were given choices based on photos, stories about beneficiaries, and pie charts of expenditure. Never were the pie charts a significant factor in choosing which charity to support.

I am not as extreme on this point as Professor Myles McGregor-Lowndes of the Australian Centre for Philanthropy and Nonprofit Studies at QUT. During a presentation on accounting for charities (which he managed to make interesting), he called on the Fundraising Institute of Australia to bar charities who focus on how low their cost of fundraising is.

But no fundraiser should allow their organisation’s beneficiaries to suffer because they are bamboozled by the unsubstantiated bollocks that passes for fact when it comes to ROI. Of course, you need to be careful with your funds – I am not suggesting charities go out and take ridiculous risks – just plan strategically.

Remember the exercise I asked you to do right at the beginning? For the third question (Why you support your favourite charity) did you write something like this?

Of course not. Do you even know their cost of fundraising?

Donors care about what you do and the impact that you have. Not what it costs you to raise it.

Previous Post
VIDEO: Good and Bad Delusions: What My Cat Is Teaching Me about Fundraising
Next Post
Free Toilet Paper! How Much Is It Going to Cost? VIDEO: How Much Do YOU Cost Your Organisation? 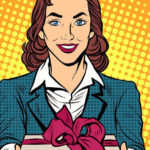