The Slow and Boring Path to Fundraising Success: 7 Ways to Win Big

6 months ago
Jeff Brooks
No Comments

Remember those bright yellow silicone “Livestrong” wristbands? They appeared in 2004, after being developed by Nike and their ad agency. The Lance Armstrong celebrity mojo combined with a teen fad, and a mind-bending 80 million wristbands were sold. It was a genuine blowout that rocketed a small nonprofit to unimagined levels of awareness.

It’s what nonprofits dream of: a simple, powerful effort utterly changing the game, pole-vaulting you past decades of hard work — the fast, exciting, and glamorous path to success.

No wonder a sort of wristband fever struck the nonprofit community in the couple of years after “Livestrong” hit the world. Pretty much every development director of every nonprofit started crying, “Get me a wristband!”

The first copy-cat wristband probably sold pretty well. And the second. But by the time charity # 50 rolled out its wristband, the magic was gone. It wasn’t that cool anymore, and the market was saturated with wristbands anyway. They became markers of unoriginal and ineffective fundraising programs.

So many nonprofits have their thoughts and dreams focused on something that will catapult them into the dominating position they know they deserve.

Fortunately, there’s another path to success, and it’s a very good bet: the Slow and Boring Path.

It doesn’t sound like as much fun as the fast and exciting path, but it’s a lot more likely to get your organization — and your career — where you need them to go.

(And there’s a surprising and wonderful “secret bonus” for those who follow the Slow and Boring Path. I’ll tell you about it at the end.)

The top reason nonprofits fail to raise enough funds is painfully simple: They don’t have a fundraising plan. Without a plan, they are always flying by the seat of their pants, always two steps behind where they should be.

Always plan your fundraising a year in advance. Include dates: When work starts, when it finishes, and some of the key interim dates. Make your plan public, shared by all who are involved — and their bosses.

There may be times when you should deviate from your plan, but it’s far easier to revise a solid plan than it is to make things up as you go!

This is really part of having a plan, but it’s so important, it needs a category of its own!

Projects collapse when deadlines are blown — or not set in the first place. An environment without deadlines is one where the most disorganized or least engaged people control the pace. The cost in lost opportunity can be catastrophic.

Set reasonable deadlines, and then fanatically keep them.

Do you know your response rates down to the second decimal point? Do you track average gift and net income? Do you know your retention rates? Can you see how the numbers interact with each other like an intricate ballet?

Good fundraising decisions come from staring at spreadsheets, asking pedestrian questions and internalizing a mass of quantitative facts. I doubt a spreadsheet will ever win an award — spreadsheets are just too Slow and Boring. But there’s a lot of good stuff hiding in those little cells. The more you know and understand the math, the more good things you’ll be able to make happen.

We’ve all heard the donor who said, “You don’t have to send me a thank-you letter. Save the money.” He’s giving you bad advice. He thinks he’s telling you the truth, but he wants to be thanked. If you fail to thank him, he’ll stop giving.

Make thanking donors a priority. Thank them promptly (the sooner after the gift, the better). Thank them creatively and emotionally. Put at least as much thought into thanking as you do into asking.

And not just your donors. Thank everyone. Your vendors, partners, and colleagues. Thanking them might not seem like a big deal, but it adds dollars to your bottom line — and likely years to your life.

Show your donors they make a difference

Want to know one of the main reasons so many donors (around 80%) give once to an organization and never again?

Because they think their donation made no difference.

It’s up to you to show your donors otherwise.

Contact them regularly — with donor newsletters and other communications with this message: Remember that donation you gave recently? The one we said was going to accomplish something important? Well, your donation did do that! Here’s what happened because you gave!

This is one of the most important ingredients for keeping your donors. Don’t skimp on it!

Too many nonprofits try to eliminate failure from their fundraising. Thing is, if you aren’t failing, you aren’t moving forward. An effective fundraising program always tries new things — big ideas, small ideas, money-saving ideas, even dumb ideas that need to be put to rest.

The Slow and Boring trick is to fail well — fail in ways that yield good learnings without betting the farm on unproven ideas. A good failure can be as valuable as a success.

So try new ideas. Try variations on old ideas. Test them if you have the quantity to give you valid results. But even if you don’t, try new things and pay close attention to the results.

Most fundraisers spend most of their time working to motivate donors to give one-time donations. These episodic donors are the majority of most donor files, but they are your least profitable donors.

In fact, if all you do is work on episodic donations, you are not doing sustainable, future-facing fundraising.

All fundraisers should see their file of episodic donors as candidates for three other donor groups:

Donors can join one or more of these groups.

These are by far your most valuable donors. They will fund your organization today, tomorrow, and well into the future … if you have them. Make sure you are always giving your episodic donors chances to move into one or more of these groups. Many (maybe most) of your donors will not do this. But it doesn’t take a huge number of them to transform your program from getting by to flying high!

The Slow and Boring secret

Now the secret I mentioned earlier: The painful irony of the fast and exciting approach is that it actually makes exciting breakthroughs less likely.

When you faithfully walk the Slow and Boring fundraising path, you increase your chances for exciting breakthroughs. Being consistent and paying attention to the details helps create fertile situations where you can take advantage of rare opportunities that come. Give it a try.

Then stick with it for a few years.

You may or may not experience a breakthrough, but you are almost guaranteed to succeed!

Another way to win big: Get expert help with the specific challenges you face. Start by scheduling a free 25-minute call with one of our Fundraisingologists. They will give you great free advice, and help you identify which Coaching+ program might be right for you. Click here to book your call. 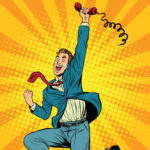