My Biggest Fundraising Disaster: The Sad Tale of the Cynical Humanitarians

Is your organization looking for a fundamental, game-changing shift in how you raise funds?

I wish you the best. I hope you find it.

But let me tell you something not to do in your search for transformation by sharing the sad tale of the Cynical Humanitarians.

A nonprofit I worked with hired some Brand Experts and told them, “Our fundraising works, but we hate it. It’s tacky. We’re embarrassed to show it to our friends. Please give us a brand that we’ll love — and that raises the funds we need.”

The Brand Experts knew exactly what to say: “It’s not your fault; it’s your donors. They’re too old. Too uneducated. Too down-market. We’ll do the research and find the demographic segment you deserve. They’ll respond to marketing you’ll feel good about.”

They came back three months later with an impressive volume of research. They’d discovered a slice of the Great American Pie that they called “Cynical Humanitarians.”

I was at the meeting. The Cynical Humanitarians were urban, educated professionals in their 30s and 40s, well traveled, and not likely to respond to traditional fundraising methods or media. (“They’re too smart for direct mail,” the report noted.) There were tens of millions of them, clustered in cities and on the coasts. They were frequently missed by traditional fundraising because they were too cynical for it. And too smart.

They didn’t show up on anybody’s fundraising radar because they didn’t give to charity in meaningful numbers. They weren’t on rental lists, and they didn’t spend time on nonprofit websites. Those things didn’t reach them. They were simply waiting for a new type of fundraising to unlock their generosity, the Brand Experts explained. We were going to be there first.

I’m used to thinking about donors in an almost anthropological way. Maybe you know what I mean. It’s as if we quietly visit their community and take notes, searching for patterns and truth.

This was different. As the Brand Experts described the reading and entertainment habits of the Cynical Humanitarians, I got the strangest feeling: They were describing me! I read those magazines! I listen to NPR! I feel that way about politicians! Just like the Cynical Humanitarians, I want to make the world a better place but suspect that many attempts to make things better don’t really work. I ignore advertising because I think it’s either irrelevant, stupid, or a pack of lies!

The Brand Experts were describing not only me but most of the people in the room. Who knew? We were all Cynical Humanitarians.

It was an exhilarating feeling: Donors we understood. Donors who would not present us with inexplicable tastes or unfathomable attitudes. Donors whose thoughts we could divine — because their thoughts were our thoughts. We knew our donors.

Of course, it would take radically different messaging and whole new channels to reach the Cynical Humanitarians.

And our new approaches and channels would never reach or persuade our current donors and prospects. But that was the genius of it. Out with the old! In with the new!

Everything we did to reach the Cynical Humanitarians failed — all the Brand Experts’ recommendations, as well as many other attempts we cooked up to try and rescue the project. Not a single project came even close to working.

When things go wrong in fundraising, they usually go slightly wrong. Response dips by 10%. Average gift slides a couple of dollars. Not here. This was dramatic, record-breaking failure. Several of my own personal worsts happened during the Cynical Humanitarian campaigns.

In the end, we’d netted ourselves about 100 Cynical Humanitarian donors — at a net cost of thousands of dollars per donor. To put that in perspective, in a normal year, we brought in several tens of thousands of new donors at a small net cost each. If that weren’t bad enough, we eventually found that 85% of these new donors never gave another gift. Their retention was less than a third of that of our old donors.

Within three years, there were probably two or three of our Cynical Humanitarian donors left. No, not two or three thousand:  Two or three.

Apparently, the Cynical Humanitarians were too cynical to be donors. And too young. They had all the hallmarks of people their age: unresponsive to fundraising, even messages tailored to them and presented in their preferred channels, and far less likely than traditional donors to stick around and give again. (If you think your donor retention rates are dangerously low, try fundraising from young donors and watch those numbers drop by as much as half.)

We switched back to our old-faithful donors — the ones who responded to the fundraising everyone hated — and began a years-long climb to recovery.

The cost of the Cynical Humanitarian experiment was millions of dollars if we took into account the value of the donors we didn’t get while we were chasing the dream demographic.

There’s a diabolic cleverness to the all-new-donors ploy. It feels so right. So exciting. In theory, it could work. But the chance of success is microscopic, and the consequence of failure is devastating.

Do you want to succeed in fundraising? Learn to love the donors you have. Find better ways to reach them and make them feel connected and important. When you’ve maxed out that group of donors, then start looking for new groups.

And most of all, unless your staff is made up entirely of church-ladies in their 70s, don’t base your experimental messaging on what insiders like.

(This post is excerpted from The Money-Raising Nonprofit Brand by Jeff Brooks.  The anecdote is true, but numerous details are altered to protect the identity of various innocent and guilty parties.)

Previous Post
VIDEO: How To Boost Your Direct Mail Campaign After It Has Gone Out
Next Post
7 Bad Habits of Ineffective Fundraisers 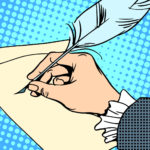 The Best Way To Get Donations From Under 40s…