1 year ago
Sean Triner
No Comments

Premium direct mail is when charities send a gift, like greetings cards or a tote bag to their potential donors. Like the one below. 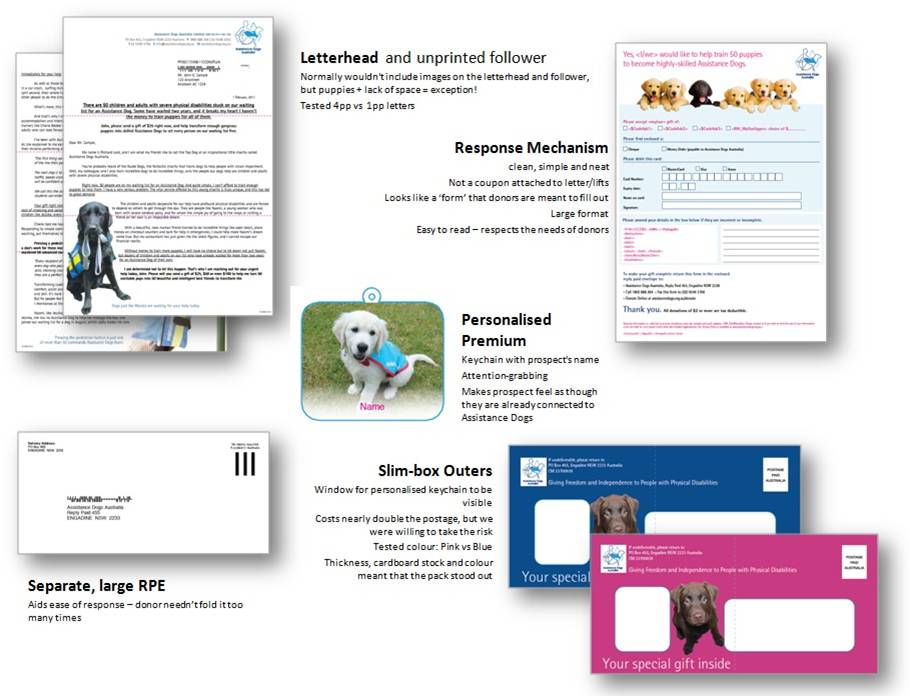 But are these one-off donors ‘real donors’, or just people responding out of guilt, or even ‘bribed’ by their gifts?

The data below shows how Assistance Dogs Australia has fared since they started mailing large volumes of premiums in 2013. They also invested in monthly (regular) giving – calling new direct mail donors and asking for monthly gifts, and later on, investing in face-to-face.

Top Dog at Assistance Dogs, Richard Lord told me “We trialed premium direct mail and the results were unprecedented. This spurred us on to invest in the acquisition of cash donors who have been motivated to become regular givers and to leave bequests.”

Focusing on the cash scale (green), you can see the huge growth they had.

After taking into account the original cost of acquisition, the net effect has been transformational for this charity, their brand awareness has skyrocketed, and their future ability to provide services secured.

Richard said, “The increased funds have added stability to our organisation allowing us to diversify our programs and to increase the numbers of clients we serve.”

Basically, those extra funds helped them get more dogs trained and placed.

Jason Smith, the boss of fundraising at the Burnet Institute in Melbourne told me the results of this big premium pack below that he produced with Pareto Fundraising. (Note to North American readers: the response numbers you’re about to see will make you green with envy! For a number of reasons, direct mail response rates are much higher in Australia than you are used to.)

But only a quarter of these new people donated a second time in response to subsequent appeals. So overall, 3% of all of the people he mailed in that acquisition appeal gave more than once.

If he had mailed a non-premium he’d have been lucky to get 2% in the first place.  AND he wouldn’t have had that income from the 9% of donors who gave just once – effectively subsidising the costs.

In addition, he is tracking bequests and has had a couple of these new donors confirm they have put Burnet Institute in their will and is following up a load of other bequest leads.

Premium direct mail is not for all charities, and responses are lower now than in the olden days (like five years ago) but it remains the biggest source of donors and retained monthly givers.

Should you consider premium direct mail acquisition for your cause now, in 2017?

For many charities – probably not.  It is hard work, expensive at first and needs specialist skills, a good quality donor database, and project management.

But generally, I would say that it is still worth looking into if you know what you are doing in this area, have qualified staff or suppliers and you know how to follow up these new donors for bequests and mid-value donations.

Addendum:
A client is now (2022) considering premiums – five years since I wrote the article below. Has much changed?

In Australia, with very low numbers of donor prospect lists available to charities, we quickly got to a point where 2017 was about the peak in volumes mailed. After that many charities simply ran out of lists to go to!

As response rates dropped and prices increased volumes of mailings dropped. The Soi Dog Foundation, Lifeline, Australia for Dolphins and others showed that online to phone two-step outstripped premiums in acquisition performance, and budgets were diverted online.

Some charities still do high volume direct mail acquisition, which remains the best source of future bequests and mid-major donors. But it is costly and gets lower responses than in the past.

Direct mail should still be considered when looking at donor acquisition, and the gist of this article is still true – premium mailings get higher response rates than non-premiums. But their second gift rate is lower.

If you are looking at donor acquisition check out Moceanic’s training content using this link.

Or contact me for a free Zoom chat about donor acquisition using this link! You Have No Dramatic Stories to Tell? You’re Looking at it Wrong! Thank You For ‘Hanging Out’ With Me